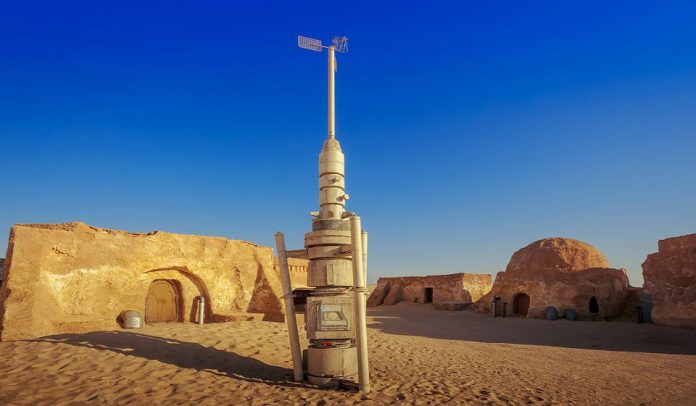 As a Star Wars fan, there is a destination you must visit, it’s Mos Espa. The site is called Shatt Al Gharsah, in the dunes of the Tunisian Sahara, exactly in the city of Nefta, few kilometers from Tozeur in Tunisia.

Tunisia is not just an other country in Africa, it’s a rich tourist destination with various culture and a lot of things to discover, one of the experiences can be visiting a unique film set as the Mos Espa.

I had the chance to go there several times and discover this magical movie set located in the heart of Tunisia. I even joined a Star Wars trip so I was fascinated by the place and decided to write about it for you folks. 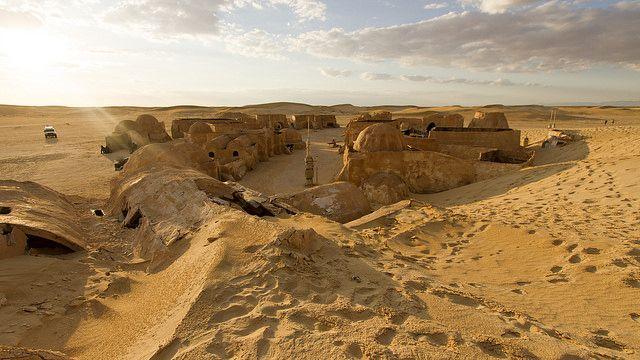 In the movie Mos Espa is the largest spaceport of Tataouine, place of birth and life of the little boy Anakin Skywalker, who would become the big bad Darth Vader. It is in this infrequent city that the Jedi Master Qui-Gon (played by Liam Neeson in the movie) meets the little Anakin.

To be precise, and as you are a fan of Darth Vader and his friends, it is the first trilogy from 1978 (Star Wars: The Empire Strikes & Return of the Jedi) which has most filmed in Tunisia.

There are still some scenes shot for The Phantom Menace and the The Attack of the Clones. And these are scenes from Episode I and II, shot on 1997 that interest us today.

I’ll not be lying to you: it is quite fascinating to be in the settings of a saga that marked my childhood. We expect at any time to be face to face with the Jedi Master Qui-Gon (Liam Neeson in the movie) or one of those Stormtrooper asking for papers.

The Unusual Trip to Mos Espa

Just surrender and let yourself be guided by the Force, and Unusual Trip, we take you to Mos Espa in Tunisia! 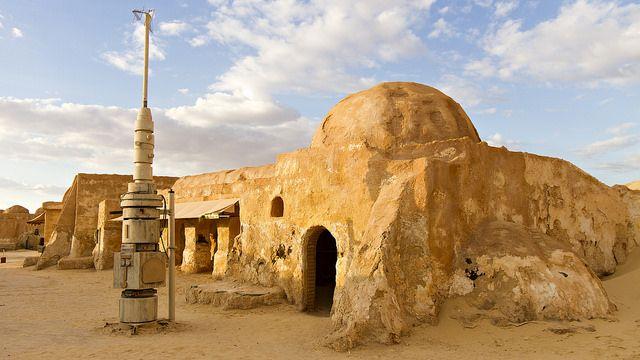 Built in 1997 by the crew, the Tunisian National Tourist Office cleverly asked Georges Lucas to leave the decor. It became a beautiful little tourist attraction, which is worth seeing. No need for Speeder bikes or Millennium Falcon, a road was engraved to take you there. A minivan or Kat Kat (French for Four-wheel drive vehicle 4X4, as in Tunisia they mostly speak French), if you want to arrive by the dunes.

Shatt Al Gharsah is a natural site that hosts this scenery, is a salt plain, few kilometers from Tozeur very accessible by road. And it is obviously part of the top Star Wars Sets to visit around the world.

The place is magical. Lost in the middle of the dunes, only the fans of Star Wars can be found in this mythical place. I had fun discovering the backside of the decorations, fake houses, fake automatic doors, fake air purifiers … we want to see everything, take a picture of everything. 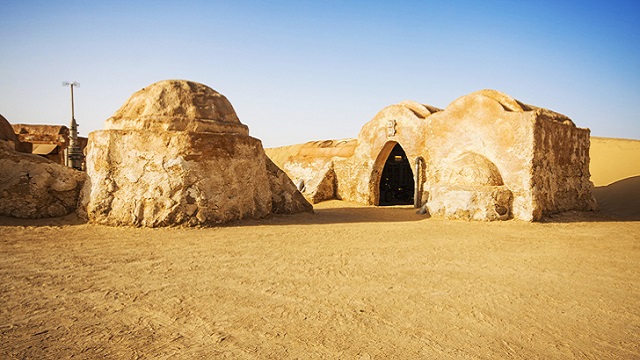 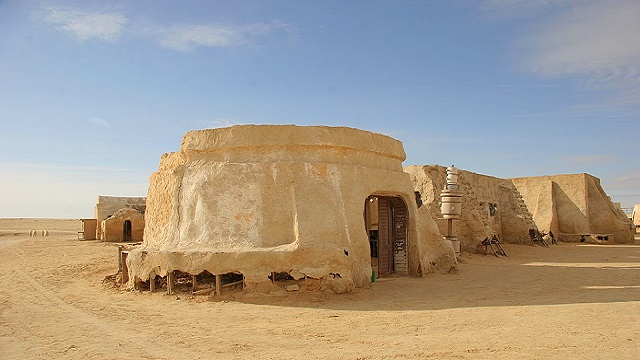 In the Star Wars tour, Mos Espa is the last stop. We spent our last afternoon and our last night of the trip (took 3 days) in this magical place.

The tour operator suggest to visit this place in Star Wars Costumes. Everyone takes his Star Wars outfit in his luggage. Once you arrive at the place, you totally blend into the decor. For me, as much as I’m a Star Wars’ fan, but I’m not the cosplay type of person, so I didn’t experience the full scenario. 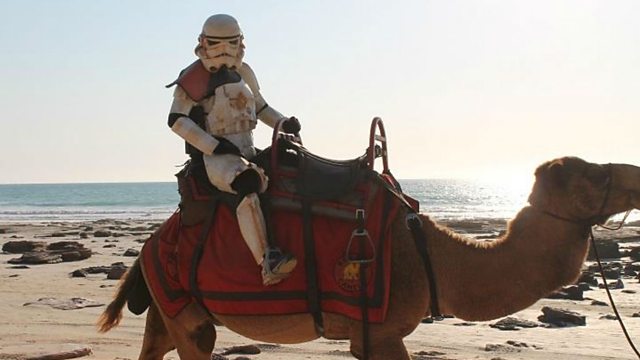 Just 2 km from Mos Espa (Shatt al Gharsah), you will be able to discover the Lars Moisture Farm (Shatt al Jerid). It’s just the outside igloo, since shooting for the interior was done at the hotel Sidi Driss 300 km away in Matmata. 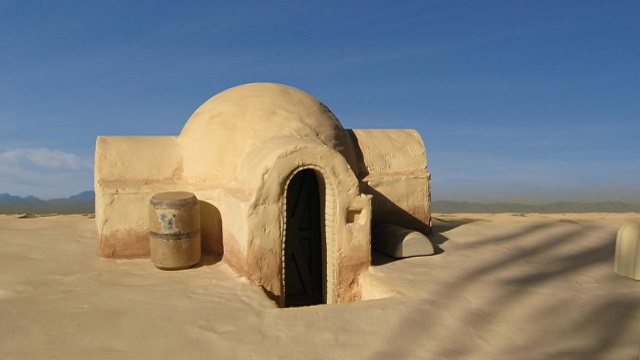 The original igloo built in 1977 for the shooting was destroyed. This one is another copy made in 1997 for the Episode II. Visiting this igloo is obviously a must when taking th Star Wars trip.

The one thing missing is the second sun, all original scenes from the movie show the second sun in Star Wars in this specific location near the igloo.

Pro Tip: To enjoy the location and arrive in time, I suggest you rent an ATV / Quad bike, you’ll be able to spend more time, enjoy the sunset and come back to complete the tour with your group.

After all these emotions, an exceptional dinner awaited us behind the dunes of Mos Espa. It was included in the tour of this Star Wars trip.

After playing the role of a Jedi at Mos Espa. We joined the group behind the dunes to enjoy the Intergalactic Smugglers Cartel. A Bedouin Tent that offers a typical Tunisian dinner. 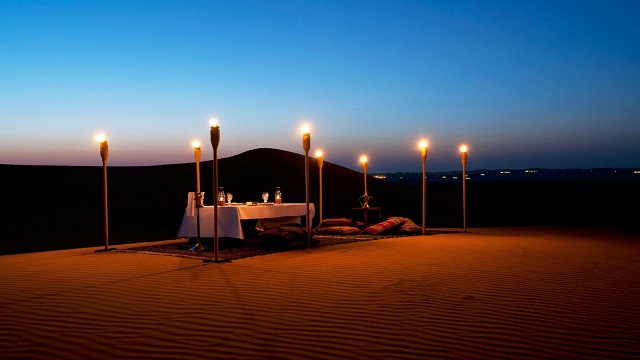 But we respect the tradition of our Star Wars trip: we spent every night watching an episode of Star Wars saga on the big screen. And as it was our last night in Tunisia, we reveled the Jedi Return Desert. 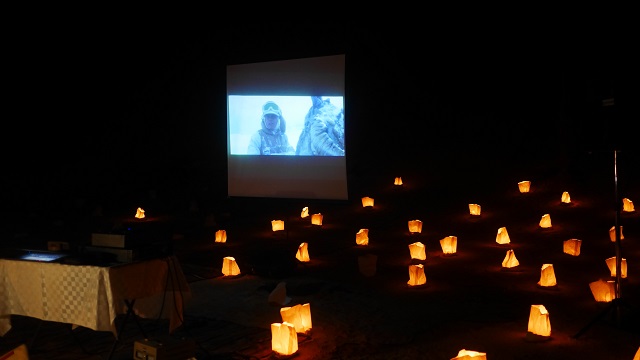 This sum up our trip to Mos Espa, discovering the Lars Homestead and enjoying a fancy Dinner of the Dunes while watching our favorite movie Star Wars.

How and Why did Georges Lucas pick Mos Espa?

I had the same question when my friends suggested the Mos Espa tour. So I did some research and found almost an answer.

Georges Lucas had a contact (someone from France) helping him create and write the screenplay for the Star Wars movie. So his job was to help building a set based on European mythologies (Templars, Greek mythology).

So his French friend shoot out the expression: “Go to Tataouine”. Yes, in French, go to Tataouine means that we are going to be lost at the end of the world. All this comes from the prison built by the French army in the Southern Tunisia. We knew that a sentence in the prison of Tataouine, often results in a journey without return.

Long story short, the director pick the igloo, but the Mos Espa shooting was for the second episode of the trilogy in 1997.