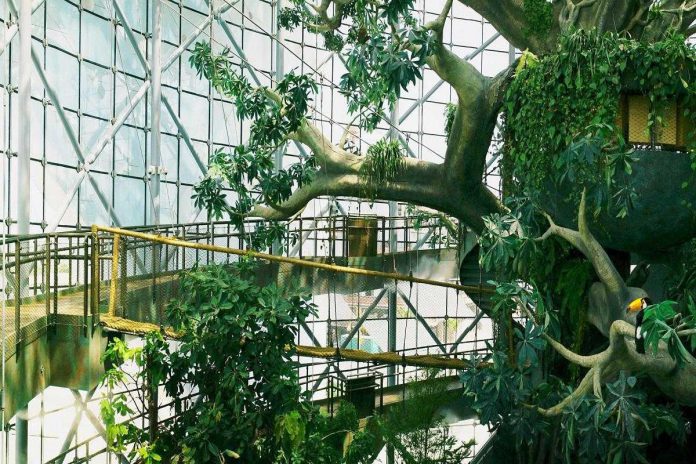 There’s more to the United Arab Emirates‘ wildlife. Contrary to what some people might believe, the UAE is teeming with life, with some species considered endemic or can only be found in the country. Today we’re featuring The Green Planet and some of their activities.

The Green Planet has it all in one place

The key to this diversity of wildlife is UAE’s geography. The country has different types of terrain which make these as the perfect habitat for different kinds of wildlife. These range from salt pans to deserts, mountains, and oases.

But if you are pressed for time, and you cannot go to these different destinations, the next best thing that you and your family can do is to visit The Green Planet.

Located at the junction of Al Wasl Road and Safa Road in Dubai, The Green Planet is the region’s first biodome that seeks to recreate a different tropical rainforest environment.

Boasting over 3,000 species of flora and fauna, the indoor rainforest park seeks to inspire amazement and appreciation for nature in its visitors by deftly combining nature and science.

If you’re planning to stop by this fascinating human-made rainforest, here’s a brief glimpse of the park’s different attractions:

Australia is home to different beautiful (and sometimes weird) species of animals. Over 80 percent of which are endemic to the continent. According to experts, this high level of endemism can be attributed to different factors, including the continent’s isolation and unusual pattern of climate change.

If you visit the park during the morning, you can get the opportunity to feed the Kookaburra, an Australian bird known for the distinct sound it makes, similar to a laughing person.

Ready to conquer your fear of creepy crawlies?

Once a day, The Green Planet offers up to six guests the opportunity to get up close with different species of insects, worms, and arthropods. The park biologists are ready and willing to facilitate your interaction with these amazing creatures and answer your questions.

What makes sloths such chill creatures? You can get the answer to the question for yourself by joining The Green Planet’s Sloth Encounter.

Every afternoon, up to ten guests can get up close and personal with one of the world’s slowest moving mammals – the sloth.

Reptiles may not be as cute and cuddly or even as majestic as some animals. However, these creatures play vital roles in the ecosystem.

Apart from playing the role of prey for larger animals, various species of reptiles help keep the delicate balance in an ecosystem by preventing overpopulation. This is why these animals are effective in controlling the population of insects, rodents, and even fish.

You can learn more about these fascinating creatures, including snakes, turtles, lizards, and geckos, in The Green Planet’s Reptile Encounter.

There is probably no other freshwater fish that has captured the imagination of the public other than piranhas.

Native to South America, piranhas have fascinated people due to their aggressive and dangerous behavior. But there’s more to these fishes than their portrayal in movies or pop culture myths.

The Green Planet’s biologists can help separate fact from fiction about these creatures. Or you can simply watch in amazement as they go into a feeding frenzy.

Birds are typically the first casualties of rapid deforestation. Through The Green Planet’s Bird Encounter, you can get up close and personal with different species of birds like toucans and parrots, and learn the impact of various environmental woes on these winged creatures.

Fruit bats play a crucial role in their native habitats – disperse seeds. The slow loris, on the other hand, is the only known mammal that has venom.

The Green Planet has done an outstanding job recreating these creatures’ cave habitat. This allows park guests to observe these animals as if they were transported to a cave.

Endemic to Australia, New Zealand, and Indonesia, the sugar glider got its name for its diet, consisting mostly of nectar and other sugary food.

Like the flying squirrel, the sugar glider does not fly. Instead, it glides through the air using its patagium or gliding membrane.

The Green Planet is located at the junction of Al Wasl Road and Safa Road, Dubai, and is open daily from 10 am to 7 pm. You can purchase tickets for their different encounters online or onsite.

Top 10 Destinations when Traveling Alone for the First Time